Where has this week gone?  Too bad it's not Friday yet, I'm ready for a low-key, pj-wearin', stay-at-home kind weekend!  Monday night I threw the turkeys and pumpkins back in their storage totes in the basement and drug out the remaining Christmas decor.  I have a love of putting seasonal garland on my stair banister.. it just screams holidays.  One of the things I wanted in my house during the search was the wrought iron rungs .. and I got it :)  Here's the staircase "undecorated:"

Another Thanksgiving in the Books

Hard to believe Thanksgiving has already happened and is over!  I so wish this was another 3-day work week too!!  I did not want to get up this morning, plus, it was really cold!

We had a nice time at home (our TN home) with family.  My parents and grandma arrived Wednesday and then Adam's flew down for the night Saturday.  It's nice to be able to get the parents together.  I guess the next time they see each other will be the wedding!!

Mom's new pup, Ginger, is 100% adorable.  She was not the least bit afraid of Henderson.  She would chase him around the house all day if she could except he would go jump in his crate to get away from her.

After telling myself I was not going shopping Black Friday... I caved.. majorly.  I think the highlight of Thanksgiving is seeing all the ads in the newspaper!!  I actually had to take a break from looking at them there were so many.  (Plus, those potatoes weren't going to peel and chop themselves now were they..)

So, I made my plan of attack and mom and granny decided to join me.  We left the house at 9pm and got home at 7AM FRIDAY MORNING... just in time for the sun to come up!

We started out at Michaels where I got the MOST awesome 10-drawer rolling storage cart - I actually got 2, one for my scrapbook room and one for sorting my Scentsy inventory.  Now I'm wishing I bought more because it's just that awesome and I got a heck of a deal.  I got 2 wreaths for the wedding too.

Then it was on to Target.  Target was insane.  I actually ended up stashing the few things we wanted vs standing in line for 2 hours to check out.  Plus, I really wanted the pink Chi but they only had purple and gold left and I was willing to hold out for pink... and Jen found the pink one at her Target later in the night and picked it up for me.

We then got in line for Kohl's around 11:45 (which the line was at least 2 football fields long!).  We made a dash for the home items where I grabbed my Chef mats for the kitchen, some faux fur J-Lo throws, pet blanket for Henderson, some Fisher Price baby toys for upcoming arrivals, a few outfits for Abbie and Vera Wang sheets for mom.  Oh.. and a few can openers.  Apparently, no one likes my old school "crank" hand opener.  I'm pretty sure it has a stripped gear anyway.  We waited in line about an hour to check out which felt like FOREVER because it was boiling hot in there.  I did end up with $135 in Kohl's cash which now I can go back and buy more stuff with!

We headed across the street to the big mall next.  I picked up a few things at New York and Company for mom and me and while I was waiting (AGAIN) in a very slow-moving checkout line, Mom and Granny went on to Belk.  I left NY&Co and dropped by Sephora then grabbed some fries and bottled water before hitting Belk.

I found them in the shoe section that looked like a few tornadoes had come through.  Do you ever wonder how many hours it takes to get everything put back away?!  By this point it was 4am!!  My grandma's face was priceless when I told her it was 4am.  We decided it was time to leave the mall and start making our way to Home Depot for her Christmas tree.

On the way to Home Depot we wasted some time (& money) at Ulta.  They were already sold out of the doorbusters I wanted but I managed to find a few other things I had to have.  We got to Home Depot around 4:40 and got in line.  Home Depot was actually the only place we went that had a map of where the doorbusters were located so we were able to make our attack plan.  I headed for my 22' ladder which was on one side of the story and mom and granny took over for the other side where the 7.5' tree was located.  We met back at the cash register (it was only 5:21!) and then magically shoved our new (LARGE) purchases into the Explorer that was already busing at the seams.  It really was like one of those clown cars where they just keep coming out except we were putting in.  I wish I had taken a picture because it was that amazing.

We were killing time until 6am when Bed Bath and Beyond opened so I decided to run back in Target and grab our hidden goodies.  This time it was a like a ghost town and they were re-stocking some of the doorbusters.  I was able to get the pink Chi straightener I originally wanted and also our hidden stash.  No line at the checkouts - bingo!

With our well-packed, over-stuffed SUV we headed on to Bed Bath and Beyond.  We picked up a few items, literally SHOVED them in the car and headed for home!  My thought was, if we woke anyone up we'd just pretend like we were just getting ready to head out shopping!!!  LOL

We drug everything in the dining room, had a "midnight snack"... then CRASHED!  I must say, I was SUPER impressed with my 75 year-old Grandmas!  How many of you could keep up with her?!  Plus, did I mention, she's got a sprained ankle!?  She's like super woman.

How is it possible that Thanksgiving is only 3 short days away?!  Where did this year go?  I am really looking forward to my parents and grandma coming down for a few days!  Plus, I get to meet my new "sister" as my mom likes to call her... she finally got a new puppy!  Her name is Ginger and she's an apricot teacup poodle - she's 3 months old and 1.9 lbs.  I can't wait to see that little ball of fur!!  Here's some of the pics Mom's sent of her.. we Facetime every night :-) 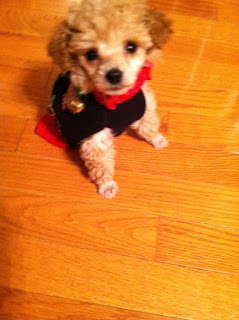 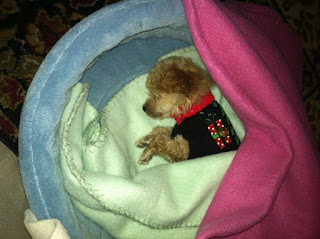 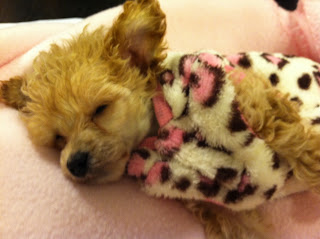 I had a pretty mellow weekend.  Adam worked over 100 hours from Sunday-Saturday.. he's basically working for free at this point!  It's a shame he doesn't get paid overtime, he would have made a nice chunk of change, that boy is way to dedicated to his job, but I suppose that's part of the reason I love him!  That being said, I was single-moming it with the furbabies.  We've discovered that Mason likes to sleep on Henderson's blanket with him at night, so sweet! 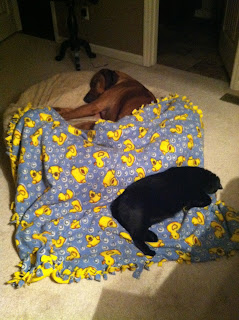 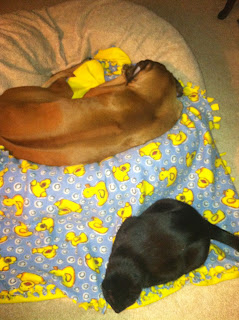 ...and a couple quick cards!  I made the ballerina birthday card for a co-worker's daughter that turned 4.  She started dance lessons this fall so I also got her a cute little leotard. 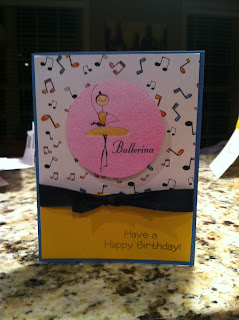 I made myself do something other than "pink" for these shoe birthday cards.  I like the different color scheme! 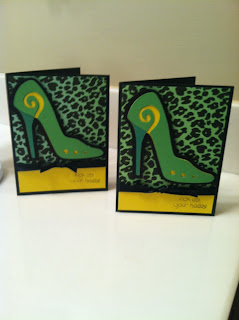 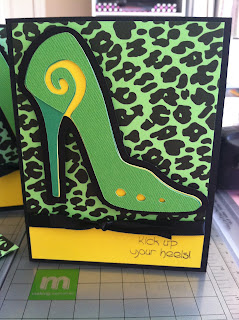 ...more like hundreds.  For a girl that LOVES pink, it's even a little overwhelming for me trying to decide on WHICH pink (or pinks) for the wedding!  So, I did a quick search, and apparently, on a color wheel, there is at least 256 shades, but many more are "possible".
Jen & I had a fabulous weekend doing all kinds of girlie thins - shopping, wine, shopping, wine, bridesmaid dress shopping, eating, wine, TV (Lifetime/TLC), chatting, laughing, and well, I told you, being girlie.  We even had a mini-makeover at the MAC counter.
We found one bridesmaid dress we really really liked and low and behold, it DOESN'T COME IN ANY SHADE OF PINK!!!  How is that even possible.
So back to the drawing board.. at least we have narrowed down what we like.  I'm also sticking with my original thoughts on long, chiffon, pink (duh) and some sort of strap (really like the one-shoulder flower but some can look goofy).
Posted by Ashley at 3:18 PM No comments:

It blows my mind that the wedding is only 7 months away!  It seems like just yesterday we had over a year to go.  Apparently, time flies when you're in love :-)

I am so excited for this weekend!  Jen is flying down!  I'll pick her up around 2 tomorrow for a fun-filled girlie weekend!  We are going to go bridesmaid dress shopping and I have a few other wedding to-dos to check off as well.  So excited to have some girl time -- Jen booked her flight 3 months ago so we've had fun counting down to her visit.
Posted by Ashley at 10:53 AM No comments:

I was feeling super crafty Sunday and wanted to make a little goodie for some co-workers and visiting family for Thanksgiving.  This ended up being a lot of layers but they were bigger pieces so it didn't take that long to assemble.  The turkey is from the Create a Critter cartridge and the clear bags are from Michaels. 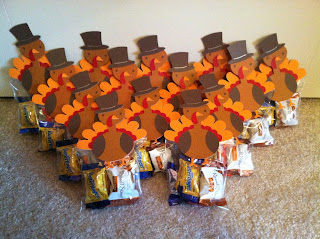 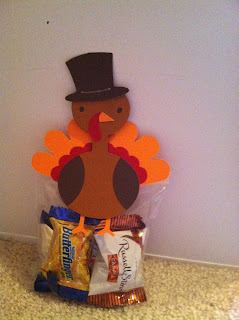 Email ThisBlogThis!Share to TwitterShare to FacebookShare to Pinterest
Labels: Cricut

We are getting ready to have a baby boy boom here in the next few months!  I haven't made baby cards before so thought I would give it a go!  I think these turned out adorable, but I'm kind of partial! 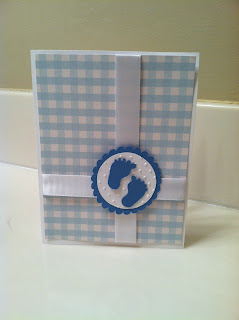 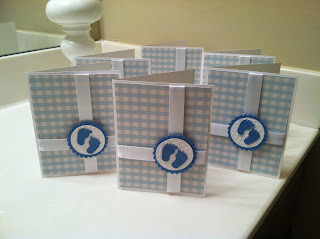 Posted by Ashley at 2:10 PM No comments:

Scrapbooking.. One thing you will never be finished with

I've always had this "dream" of being caught up with my scrapbooking.  You know, get pictures back in the mail, leisurely make pages full of wonderful creative ideas... yeah right.  I don't think I will ever be at that point, even if I didn't work full time!!  For a few months this year I was a little under 3 years behind.. now I'm back to 3 years and 2 months behind.  Sigh.
Since I'm a very goal-driven person, sometime in February I thought why don't I keep a tally of how many pages I do a month this year?  So far I'm at 106-12 x 12 pages.. not bad... but still.. over 3 years behind.  The rate I take pictures compared to the time I have to scrapbook them.. not equal.
I know some scrapbookers don't scrapbook EVER picture they take but how could I ever chose?  I love them all!!!  So, some pages don't get to be as "creative" as others but all pages aren't created equal right? haha
This weekend I challenged myself to make at least 2-12x12 pages a night and so far I'm on track for the week!  I think Adam's going to have to work some this weekend so maybe I'll lock myself in my Scrapbook Heaven and see how far I can make it.. I'm still working on the cruise I took Labor Day of 2009.. next up is my move from TN, new house in LA and fall in Baton Rouge!
Oh, and did I mention, I get huge feelings of guilt when I spend time scrapbooking vs planning for the wedding?!  haha That's a whole other post! 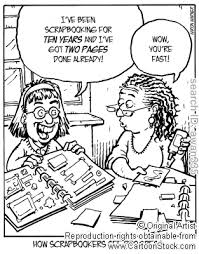 Posted by Ashley at 8:34 AM No comments: